Believe it or not, the South African property sector is valued at R5.8 trillion, according to the latest Property Sector Charter Council’s (PSCC) report — aimed to determine the size of the country’s property sector.

This study, released today, builds on baseline research that measured the size of the property market in SA at a massive R4.9 trillion at the end of 2010. It shows a meaningful increase of nearly R1 trillion in four years.

The Council reviewed market size estimation that provides a snapshot of the South African Property Sector using figures from the financial year 2014/2015.

The report comes to clarify the parameters of the PSCC whose property charter was gazetted in June 2012. The charter seeks to ensure participation of black people to the tune of 25% of the total value associated with the property industry within the next few years.

It reveals the property sector’s size at R5.3 trillion with a further R520 billion land officially zoned for commercial and residential development.

A key finding of the latest research shows that formal residential property still accounts for nearly three-quarters of property owned in South Africa, and grew from an estimated R3.0 trillion at the end of 2010 to R3.9 trillion. For the first time, it also considered informal residential property, although it has no value, which was quantified by the number of households provided by the Department of Human Settlements.

The public sector contributed a total of R237 billion, of which around R102 billion is estimated to be in the hands of the Department of Public Works, R66 billion held by SA’s 19 largest state-owned enterprises, and R69 billion owned by metros and selected local municipalities. 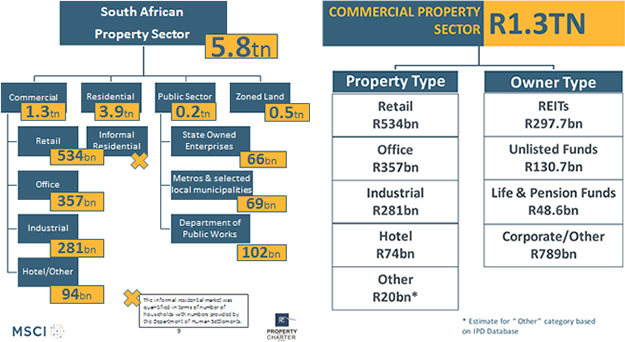 The research is part of a larger project by the council, which provides a point of departure against which various transformation charter imperatives can be assessed.

CEO of the Property Sector Charter Council, Portia Tau-Sekati says: “For a sector this big and this important it is crucial to have a hub of knowledge that consolidates information to support a common and consistent understanding of the sector.”

Tau-Sekati explains that by regularly updating this research the council also creates a measure of the effect of property cycles on the sector’s value, which can be significant.

The report was compiled by MSCI for the Property Sector Charter Council (PSCC). It remains the first and only research of its kind in the country. Its significance is far reaching.

The study also supplements PSCC’s SA Property Sector Economic Impact Report that estimates the property sector’s contribution to GDP at a significant R191.4 billion in 2012 in terms of annual income and expenditure flows generated by the sector and a R46.5 billion contribution to the fiscus.